Boeing was sued Thursday in what may be the first U.S. claim tied to the crash of one of its 737 Max 8 jets in Ethiopia this month.The lawsuit was filed in federal court in Chicago, where Boeing is headquartered, on behalf of Huguette Debets. Debets is a representative of the family of Jackson Musoni, a United Nations employee who was among the 157 people killed when Ethiopian Airlines Flight 302 plummeted into a farm field shortly after taking off from Addis Ababa on March 10. The lawsuit alleges the crash was caused by a new flight-control system incorporated in the Boeing 737 Max 8.The 737 Max 8, Boeing's newest plane, was involved in two crashes in less than five months before aviation safety authorities worldwide, including in the United States, grounded the aircraft. On Oct. 29, 189 people were killed when a 737 Max 8, flying under the banner of Lion Air, crashed into the Java Sea in Indonesia. Several lawsuits also have been filed against Boeing related to the Lion Air crash."Boeing, having knowledge of all the reports of dangerous conditions and the previous accident that killed over 150 people, should have taken steps to protect the flying public," said Steve Marks, an attorney with the Miami-based firm Podhurst Orseck, who is representing Musoni's relatives. "This accident happened when it should have never happened." The lawsuit was filed a day after Boeing, grappling with the fallout of the two deadly crashes, sought to reassure the public of the safety of its product, and outlined upgrades to the aircraft's software and increased training for pilots who fly the 737 Max. The Justice Department's criminal division is looking into the 737 Max, and the Transportation Department's inspector general is investigating the way the certification was handled, as is Congress and a special committee set up by Transportation Secretary Elaine Chao. Congress on Wednesday held the first of what are likely to be several hearings on the Federal Aviation Administration's oversight and approval process of the aircraft. The lawsuit filed Thursday alleges that the Ethiopian Airlines plane crashed because, "among other things, Boeing defectively designed a new flight control system for the Boeing 737 Max 8 that automatically and erroneously pushes the aircraft's nose down, and because Boeing failed to warn of the defect." The aircraft was "defective in design, had inadequate warnings, and was unreasonably dangerous," the lawsuit said, adding that "Boeing negligently failed to warn the public, the airlines, the pilots, the users, and the intended third-party beneficiaries of the 7387 Max 8's unreasonably dangerous and defective design, including that the aircraft automatically and uncontrollably dived partly because of erroneous sensors."It also claims that the FAA delegated authority to Boeing to approve portions of the aircraft certification process and assisted Boeing in rushing the delivery of the Max 8, resulting in "several crucial flaws" in the safety analysis report Boeing ultimately delivered to the FAA. Boeing did not immediately respond to a request for comment on the lawsuit. The acting FAA administrator defended the government's oversight approach at the Wednesday hearing. Debets is a representative of Musoni's family, including three young children. Musoni, 31, a citizen of Rwanda, was a field coordinator with the United Nations Refugee Agency based in Sudan's East Darfur, according to the agency. He had been working with the United Nations since 2014. He was one of 19 U.N. aid workers and staffers who were on board Flight 302, many of whom were traveling to Nairobi for the U.N. Environment Assembly.Complaints have been piling up against Boeing since the Lion Air crash in October. More than 30 relatives of those who died in the Lion Air crash have sued the company. In lawsuits filed last week, the families of two Lion Air passengers alleged that Boeing failed to warn pilots and airlines about a flight-control problem on the Max aircraft, and also pointed to flaws in the certification process of the jetliner, handled by the FAA. Marks, who also represents the families of 20 Lion Air victims, said his clients are also planning to sue the federal government. 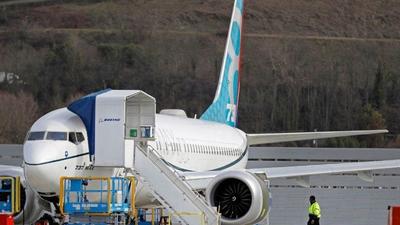 More relatives of the victims in both crashes are expected to file lawsuits against the company in coming weeks. Charles Herrmann, a Seattle-based aviation attorney, said relatives of the Ethiopian crash victims have been contacting American attorneys for representation. Herrmann is representing families of 17 Lion Air crash victims. Preliminary investigations have noted similarities between the two crashes. Satellite data showed the Ethiopian Airlines jet had ascended and descended multiple times after takeoff, mirroring the behavior of the Lion Air flight. In that crash, an "angle of attack" sensor, which measures where the nose is pointing, was showing erroneous readings throughout the short time the plane was airborne. With the sensor insisting the nose was too high, the automated system called Maneuvering Characteristics Augmentation System, or MCAS, kicked in, sending the plane down as the cockpit crew unsuccessfully fought to regain control, according to a preliminary investigative report from November.The possibility that the same scenario occurred in the Ethiopia crash prompted aviation authorities across the world to ground the aircraft. Boeing CEO Dennis Muilenburg earlier this week expressed condolences for the victims in both crashes, saying the company is "humbled and learning from this experience.""Since the moment we learned of the recent 737 Max accidents, we've thought about the lives lost and the impact it has on people around the globe and throughout the aerospace community. All those involved have had to deal with unimaginable pain. We're humbled by their resilience and inspired by their courage," Muilenburg said.

The Truth about Working from Home